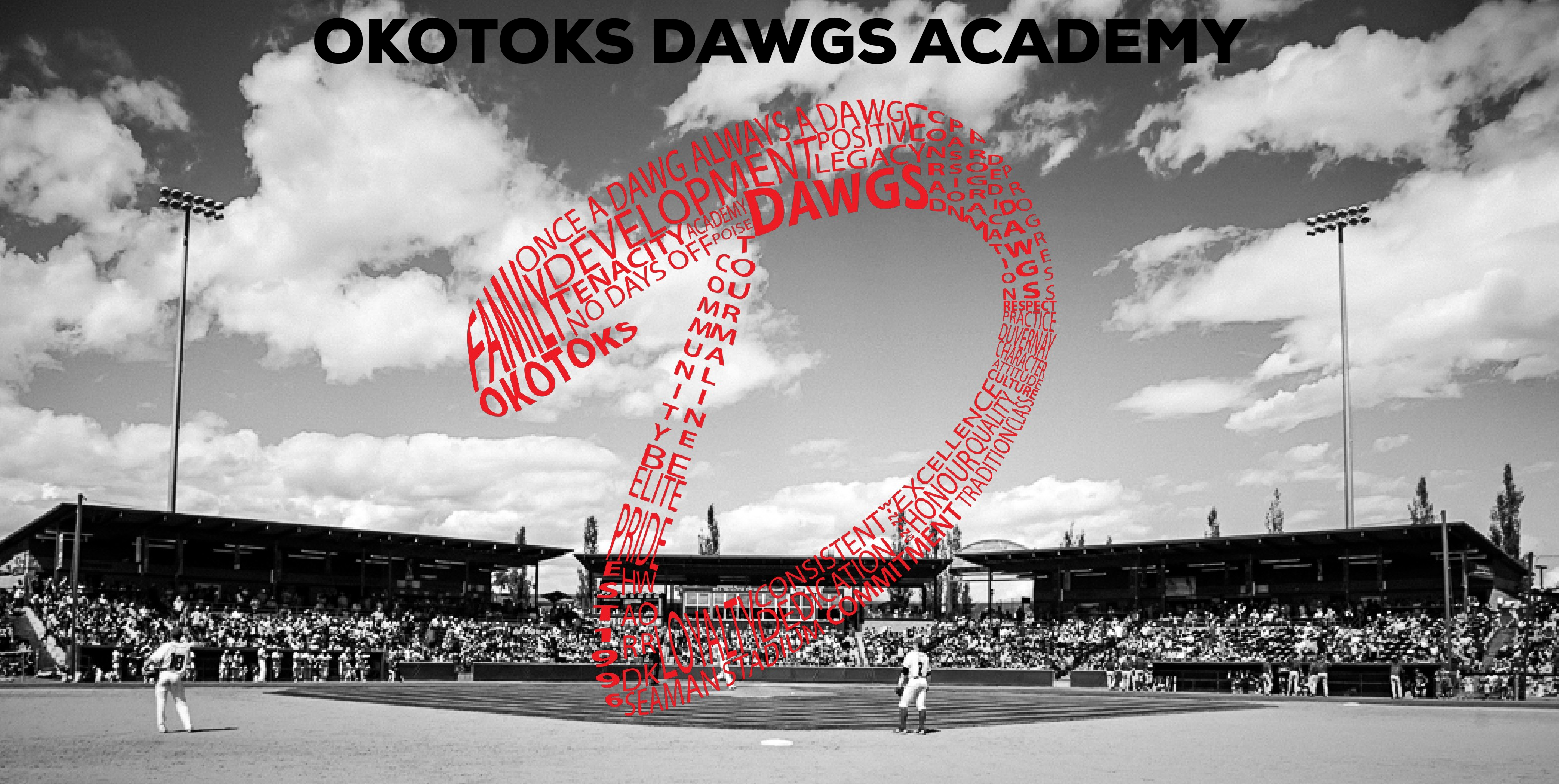 Coach Hollick is a graduate of the Dawgs Academy, playing from 2007-2010. He went from the Dawgs Academy to Chandler-Gilbert Community College in Arizona where he earned All-American and Junior College Player of the Year honours. Hollick returned from college to standout over 2 seasons with the Dawgs collegiate club where he was named WMBL Rookie of the Year and Most Outstanding Canadian Player. In 2012, Hollick was drafted in the 14th round of the MLB Draft by the San Francisco Giants, playing four years in the Giants organization. Hollick was named June Player of the Month for his affiliate team and was also selected to be a Minor League All-Star in 2013. Hollick now serves as the General Manager of the Dawgs Academy, outfield coordinator for the Academy, bench coach on 18U Black and is an Associate Scout for the Milwaukee Brewers. Coach Duda is a former member of Canada’s Junior National Team. He also played collegiately at Central Arizona College, Lewis-Clark State College, where he was part of the 2006 NAIA National Champions, and Campbellsville University in Kentucky. Duda also played for 3 years for the Dawgs summer collegiate club where he earned WMBL 1st Team All-Star all 3 years, and was part of the Dawgs 3-straight WMBL Championship teams. Duda played 4 years of professional baseball including a stint in the Liga Mexico de Beisbol (LMB) with the Leones de Yucatan and most recently with the Quebec Capitales where he was “Pitcher of the Year”. Coach Duda has served as Pitching Coach to the Dawgs Academy since 2009 and was invited to serve as Pitching Coach to Canada’s Junior National Team in the fall of 2014. Duda serves as the pitching coordinator of the Dawgs Academy and pitching coach for Dawgs 18U Black. Coach Helldobler first joined the Dawgs Academy staff in 2013 after a five year playing career at Tiffin University in Ohio. Helldobler was a three year all-league player, which included First-Team all GLIAC in 2012 along with a Mid-West Gold Glove in 2012. Coach Helldobler is the Dawgs Academy Infield Coordinator and 18U Black Head Coach. Helldobler served as Assistant Coach at Siena Heights University in Michigan, bringing a wealth of knowledge from coaching at the Collegiate level. Coach Helldobler spent 2 summers as Assistant Coach of the Okotoks Dawgs summer collegiate team. As of March 2019, Helldobler has signed a contract as an Associate Scout for the Atlanta Braves organization. Coach Pote joined the Dawgs Academy in 2015 after enjoying a career as a pitcher in the Major Leagues, including a World Series Championship with the Anaheim Angels in 2002. Pote, continued his professional career playing independent professional baseball through 2011. He capped off his career being named the Most Valuable Pitcher for the Edmonton Capitals in 2010 and 2011, returning to the city where he had pitched for the triple-A Edmonton Trappers in 1999-2000. After a playing career spanning twenty years, Pote retired and embarked on a full-time career in coaching. He served as director of player development for the Fort McMurray Minor Baseball Association, baseball director at Playmaker U in Sherwood Park and as a coach on Team Alberta for the Canada Cup. Pote serves as pitching coach on the Bantam Black team. Coach Gouthro is a graduate of the Dawgs Academy, for which he played for 4 seasons in the program. Bretton chose to begin his Collegiate career at the Prairie Baseball Academy. In two years at PBA, Bretton was recognized as a two-time all conference player, 2nd in program history for career hits, and won two championships. His success at PBA earned him an opportunity to play at NCAA DII powerhouse, University of Mount Olive. During his three years at Mount Olive, the team had an impressive record of 127-37, with 3 NCAA tournament appearances. Bretton was on the Conference Carolinas All-Academic team three times in a row while working towards his Exercise Science degree. Gouthro serves as the strength and conditioning coordinator for the Academy, and is the head coach of the Dawgs 18U Red team. Coach Ethier is another Dawgs Academy graduate, playing 4 years in the program. In that time he attended a Bantam and Midget National Tournament, finishing 5th and 2nd in the nation, respectively. Aaron was also named Catcher of the Tournament during the Midget National Tournament en route to a Championship appearance. After graduating from the Dawgs Academy, he went on to play college baseball at Thompson Rivers University. After his time with TRU, Aaron wanted to return and become a part of the Dawgs program again, returning in 2014 to become a member of the Dawgs coaching staff. In his second season of being a coach he, along with Coach MacInnis, lead a PeeWee Dawgs team to Quebec where they had the chance to play for a National title. Now in his 6th year, Aaron is taking the reigns of Catching Coordinator along side Coach Smith and Coach Procyshen, and is bench coach on the Dawgs 18U Red team. Coach Sergent was a left-handed pitcher born and raised in Manteca, California. After playing JC ball at San Joaquin Delta College, Joe was recruited by D1 Lamar University in Beaumont, Texas. He was drafted in 1999 by the Florida Marlins and played five seasons for them, playing as high as AA. From ’04-’07 he pitched for the Fargo-Moorhead Redhawks of the Northern League (now American Association) posting a 21-5 regular season record before joining the Calgary Vipers in ’08. From ’08-’10 the GBL all-star was the ace of the staff that won the 2009 GBL title and was 6-0 in playoffs during his time in the GBL. In his 12 year career, Joe boasted a regular season record of 64-33 with a 3.95 ERA in over 800 professional innings. Joe has coached in Calgary and in the WMBL, most recently for the Okotoks Dawgs. Sergent serves as pitching coach for the Dawgs Academy and is the head coach of the Dawgs 16U team. Coach Spencer is a graduate of the Dawgs Academy, playing from 2012-2016 in the program. Spencer earned an academic scholarship to attend MacMurray College, an NCAA DIII school, where he played outfield from 2016-2018. Most recently, Spencer has transferred to University of Lethbridge to complete his degree in Accounting. Spencer brings an infectious energy and work ethic to the field every day, and he will be key in the development of our young athletes. Spencer will be the bench coach of Dawgs 16U team alongside Coach Sergent. Coach McPhail enters his first season coaching with the Dawgs Academy. McPhail brings a wealth of playing and coaching experience to the program, and should be instrumental in the development of our athletes. McPhail played at NJCAA powerhouse, Iowa Western and would transfer to Indiana State University. McPhail was also a member of Team Canada from 1977-1986, including a trip to the 1983 Pan Am Games in Venezuela and the 1984 Olympics in Los Angeles. McPhail also coached at his alma mater, Indiana State University, from 1978-1980 where he served as the hitting coach. Coach McPhail will be the head coach of the Dawgs 15U Red team. Coach Smith played his collegiate baseball at Allan Hancock College in the California Junior College League where he was named to the 2nd All Conference team as a catcher. He also was a member of Team Alberta in the Canadian Summer Games in 1984. Coach Smith first joined the Dawgs Academy staff in 2011,  and is one of the top teaching coaches on the Dawgs staff. Coach Smith serves as catching instructor and head coach of the Bantam 14U team. 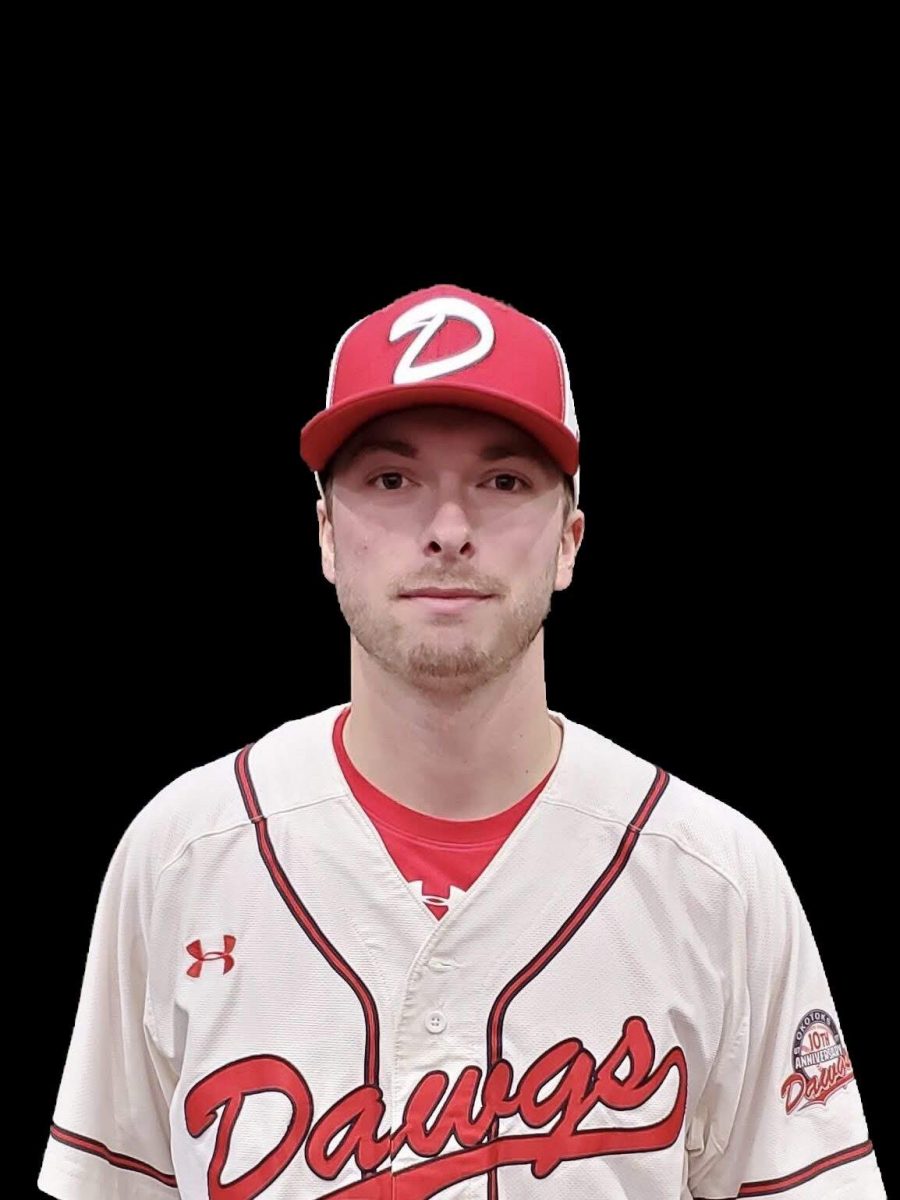 Coach Taylor was a graduate of the Dawgs Baseball Academy in 2012. As a player, of the 2012 National Championship winning Dawgs Midget Black team, throwing a no-hitter in the round robin. Coach Taylor attended Skagit Valley Community College in Washington prior to joining the Dawgs Coaching Staff. Taylor  joined the Dawgs Coaching Staff in 2015, and has been instrumental in helping to develop a strong 13U program. In his three years as the 13U Pitching Coach, he has helped guide the team to 2 provincial titles. The Dawgs are looking forward to having Coach Taylor back for the 2019 season to help Coach Smith as pitching coach of the Dawgs 14U team. 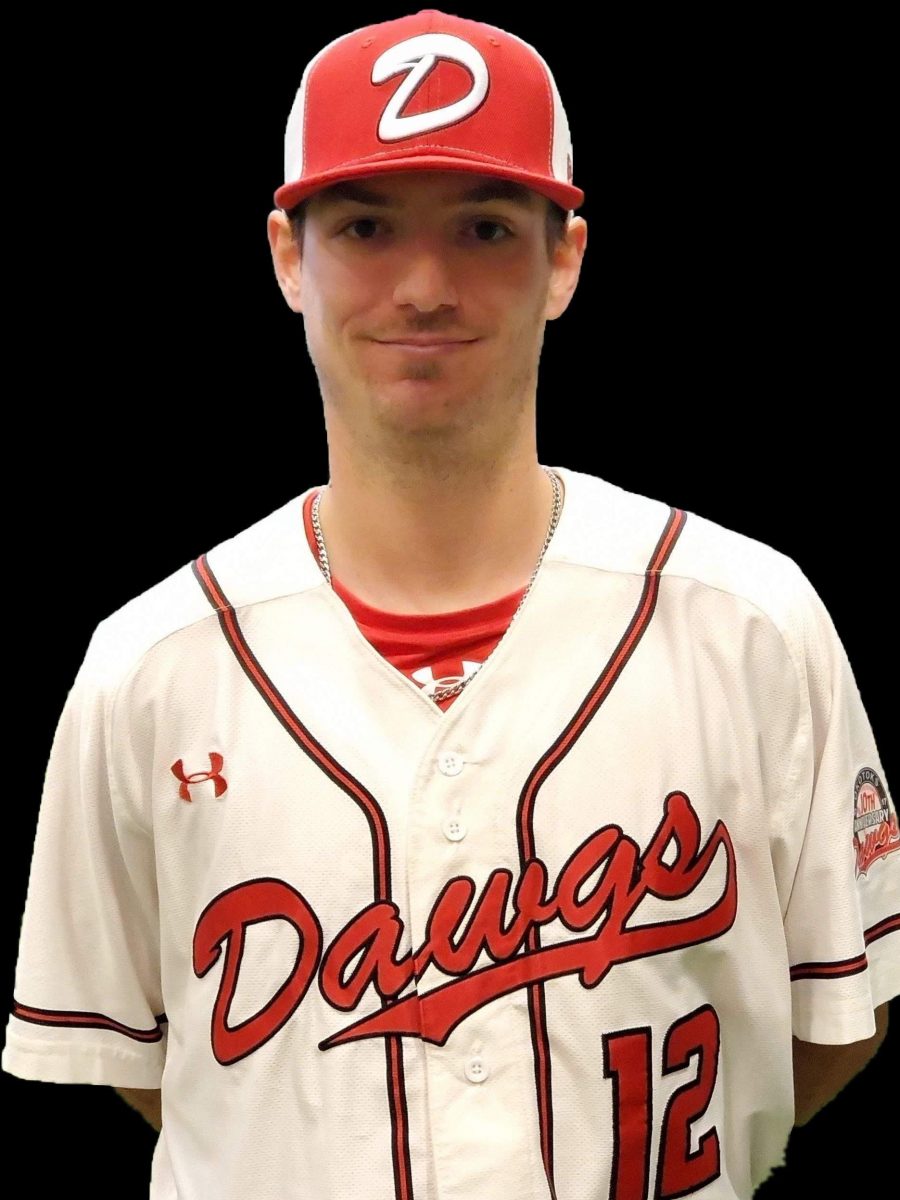 Coach Milton joins the Dawgs coaching staff and brings a wealth of knowledge and experience. Prior to the Dawgs, Milton coached from 2013-2019 at The Baseball Zone in Mississauga, Ontario; while also being an Assistant Coach with the Ontario Terriers 15U program. Tyler played 4 years of college baseball between North Lake Community College (Irving, Texas) and Humber College ((Etobicoke, ON) where he graduated with a Bachelors Degree in Sports Management. The Dawgs Organization is pleased to have Tyler join the staff and take over as Head Coach of the Dawgs 13U program. 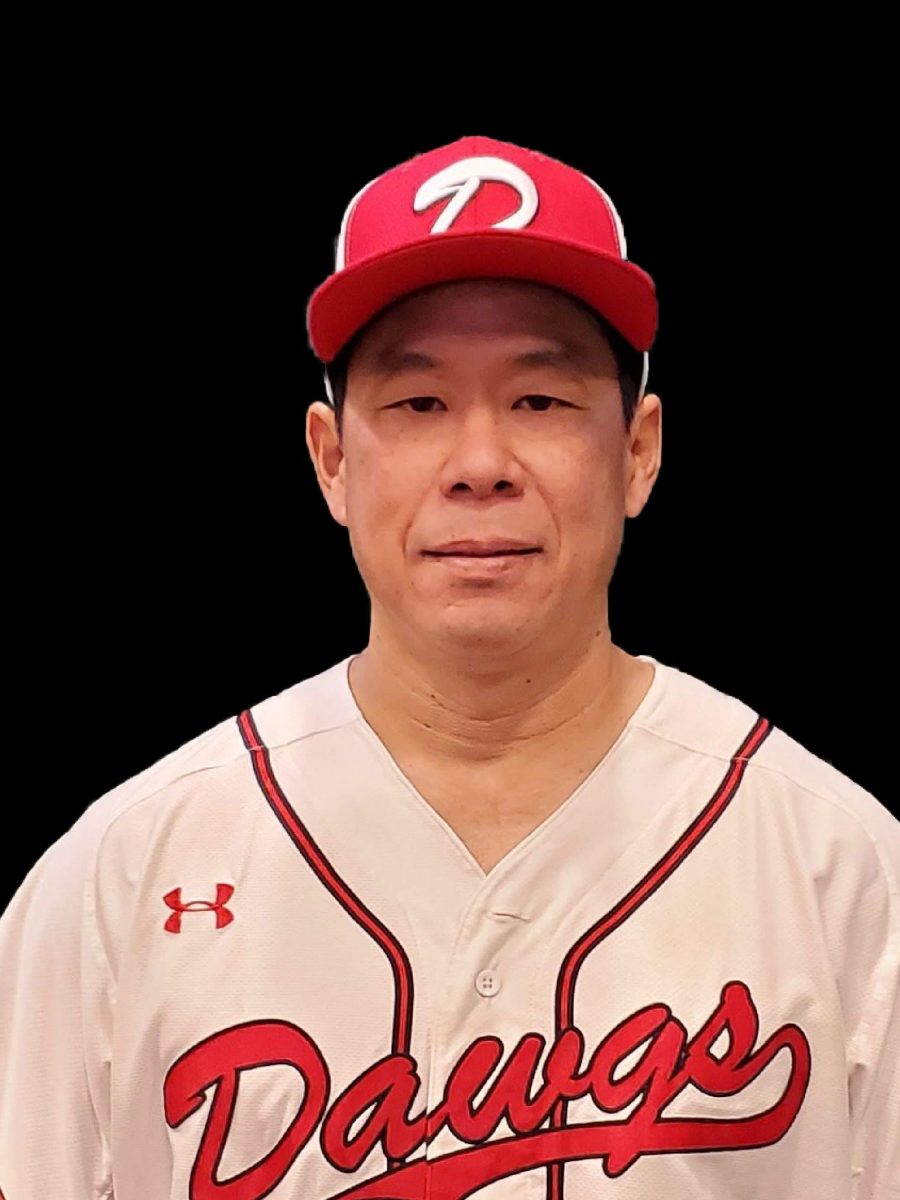 A native of Hawaii, Coach Tanaka enjoyed a 5-year collegiate baseball career as a utility player at Hawaii Pacific University, graduating with a Bachelors Degree in History and English. Coach Tanaka brings an extensive coaching resume to the table, totalling 16 years of coaching experience at varying levels with varying positions. Tanaka has coached at all levels of youth baseball, from Little League to American Legion, to American High School baseball in both, Hawaii and Okotoks. Savannah is a certified athletic therapist who first joined the Okotoks Dawgs Academy and Okotoks Dawgs Summer Collegiate programs in 2012. Blakely earned her bachelor’s degree in Kinesiology from McGill University and completed her Athletic Therapy Certificate from Mount Royal University. Blakely’s  role with the Dawgs athletes is to provide injury prevention treatment, rehabilitation from injury, and the resources necessary to do so as safely and quickly as possible. Blakely brings a wealth of knowledge and experience through baseball and other sports, including but not limited to - hockey, CrossFit, and lacrosse. Outside of working with the Dawgs, Blakely is the proud Owner of ProSport Therapy, right here in Okotoks; she also serves as a strength coach at the local CrossFit gym. 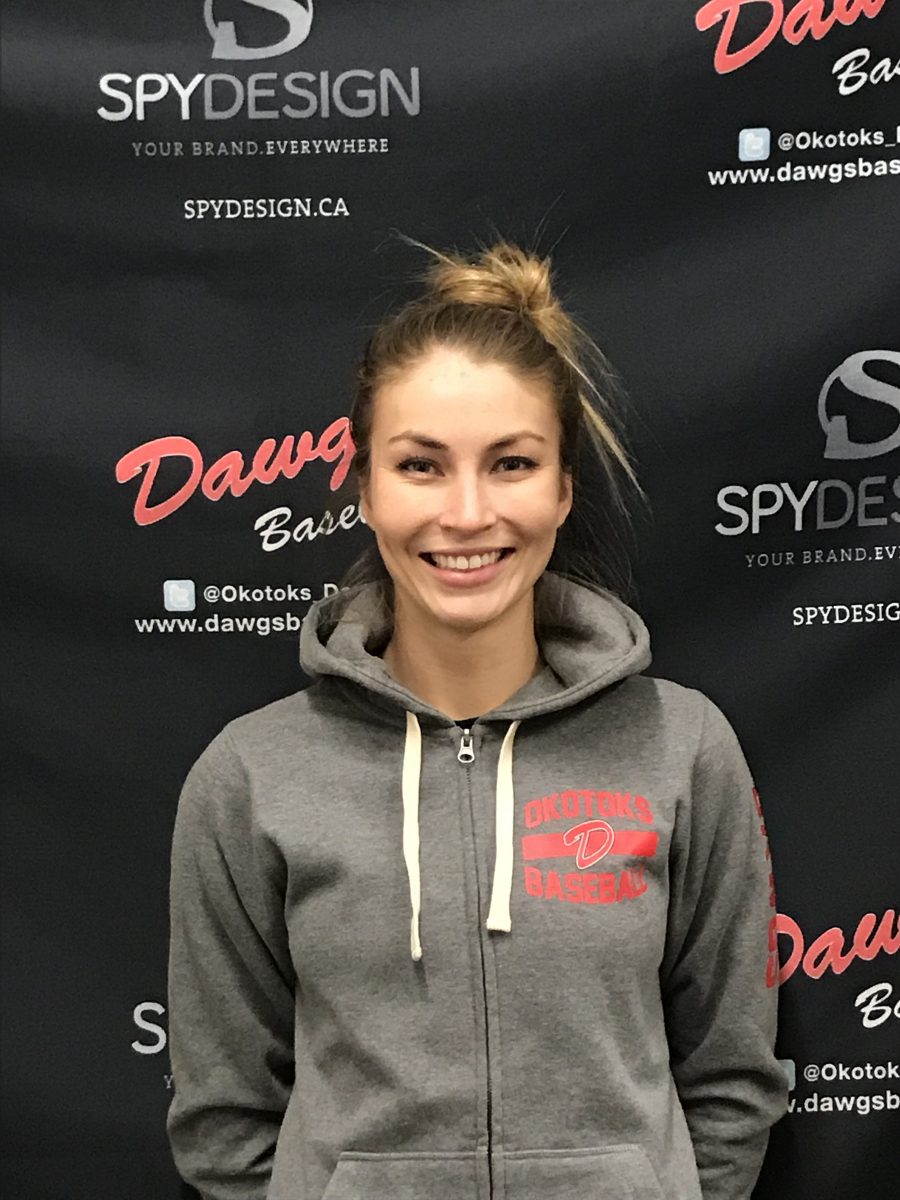 Amanda graduated from Trinity Western University with her Bachelor of Human Kinetics with specialization in Kinesiology. During her studies she worked as an athletic therapist for the women’s CIS volleyball team and other teams in the community, including the U14 BC Girl’s provincial team. She saw the need for a healthy lifestyle for optimal athletic performance and pursued her education further at the Canadian School of Natural Nutrition to receive her certification as a Certified Holistic Nutritionist. Amanda is passionate about holistic health, nutrition and fitness, and how these practices come together for overall nourishment and well-being.